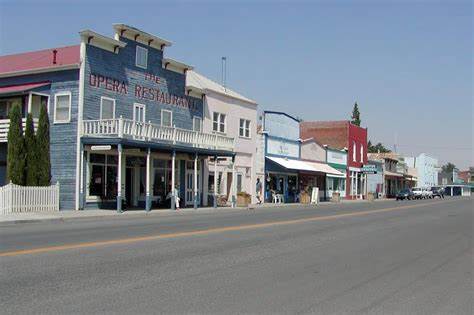 Traveling in wagons, early immigrants settled in the Shasta Valley in the early 1850s. These early homesteaders staked out their land and made the area their home. One of the first to homestead was the John Gregory family, settling in the eastern part of the county. Gregory Mountain, to the east of downtown, is named after this family.

The community was named in honor of Samuel Skerry Montague, Chief Engineer of the Central Pacific Railroad, who was most noted for his skillful engineering of the Transcontinental Railroad from Sacramento, California to Promontory, Utah, completed in 1869 when the “Golden Spike” was driven to connect the Central Pacific and Union Pacific Railroads. He later was responsible for engineering the California line of the Oregon and California Railroad connecting San Francisco to Portland. He died in 1883 of “consumption” in the town of Berryvale, now Mt Shasta City, at a friend’s mountain camp. With the completion of the Oregon and California Railroad in 1887, Montague became a bustling town and major thoroughfare. Commerce and travel throughout northern Siskiyou County was centered here, with cattle drives from Butte Valley to the east and trade to the west.
Yreka, a gold rush town and the county seat of Siskiyou County, depended on stagecoach, wagons and horseback for transportation. In 1888 and 1889 the citizens of Yreka built their own railroad from Yreka to the Montague hub. That railroad was known as the Yreka Western Railroad. Montague was incorporated January 25, 1909. Nestled in Shasta Valley in the shadow of Mt. Shasta, the natural beauty of the land is what draws people to this last frontier of California. Montague exemplifies a small town with a sense of community, traditions and family values. Montague’s community ideals and atmosphere make this town an ideal setting to raise families, as many generations have done before. With a Western atmosphere, Montague’s quaint downtown offers a variety of things to do. Because Montague is a small town rich in history, it is easy to spend an afternoon strolling along main street exploring the various shops and eateries while meeting the town merchants.

Montague offers The Dutchman’s Restaurant,  Kathy’s Deli and Shasta Valley Meats for choices pf places to grad a meal or a snack.

Check out the Events Calendar for upcoming city events.