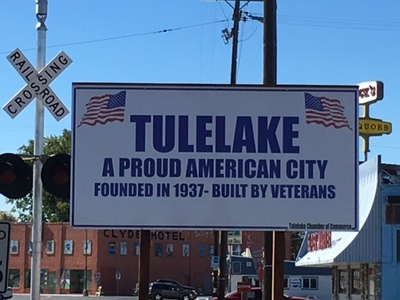 Built by veterans returning home from both World Wars I and II, they had received homesteads by being drawn in a lottery, built a thriving community and grew a cornucopia of crops. Tulelake also was the location of the largest Japanese Internment Center in the United States, holding a population of over 18,000 internees, most of whom were American citizens. Tulelake also housed a German Prisoner of War camp, which at various times held Japanese civilians, Italian POW’s and German POW’s. The German’s were used as labor on the local farms, due to the shortage of labor caused by the war.

The area was formed due to volcanic and natural forces at work and that story is well told in the Visitor Center of the Lava Beds. The early people here, ancestors of the Modoc People, left intriguing pictographs carved into the rock of Petroglyph Point, which are still visible for your viewing. The story of the Modoc War and of Captain Jack and his people, is well recorded at the Lava Beds Visitor Center and also at the Klamath County Museum ,in nearby Klamath Falls, Oregon where you can start an audio tour of the Modoc War. The Modoc were forcefully removed from their homeland after the war and were taken to Oklahoma. They have recently started to reestablish themselves here in their traditional homeland.

Local activities include cave exploring at the Lava Beds, bird viewing and photography at Tulelake and Lower Klamath National Wildlife Refuges, Fall waterfowl hunting, wildlife viewing at the Lava Beds, Refuges and the Modoc National Forest, camping available at the Lava Beds and the Modoc Forest. RV parking and tent camping is also available at the Tulelake-Butte Valley Fairgrounds. Visiting Bloody Point Winery, and Lana’s Lavender Garden are among other local points of interest. Agri Tourism is also in development and the many cycling opportunities locally and in nearby Klamath County.

City attractions and local events include the Tulake-Butte Valley Fair the second weekend of September, and other events throughout the year, and it houses the local Museum. The Tulelake Shindig is held in August and the Art of Survival bicycle event is held on the Saturday of Memorial Day weekend. Tulelake is a participant with the city’s of Dorris, Merrill, Malin, and Bonanza in the developing Barn Quilt Trail.